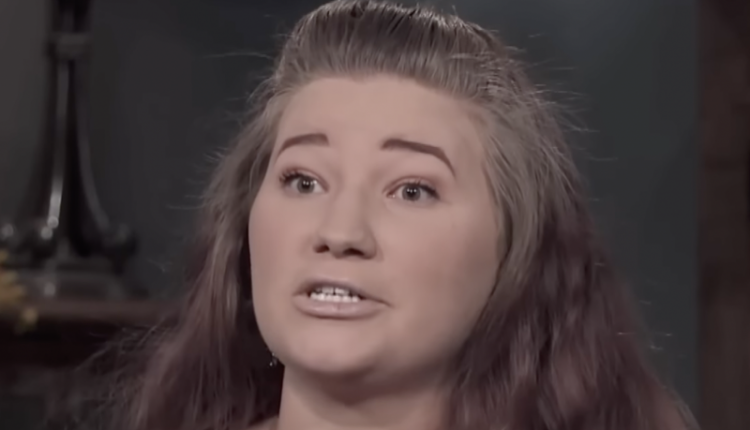 Sister Wives star Mykelti Brown Padron recently gave birth to her twins, Archer and Ace. They certainly seem to be delightful little boys and their dad Tony, is super proud of them.  Mykelti gives updates as well, and recently,  a video appeared on TikTok that showed her talking about a controversial post-partum practice: “placentophagy.” If you don’t know, that refers to people who eat their placenta after giving birth. Some of them chow it right down, warm and raw from their womb. But Christine’s daughter opted for something easier to cope with.

In April of 2021, the TLC star welcomed her baby girl, Avalon. She’s a delightful child and her grandmother, Christine Brown dotes on her. When she arrived,  fans were delighted because up until that point, the only grandchildren had come from Maddie Brown Brush, Janelle’s daughter.  Well, it wasn’t long before the next batch of babies started growing in her womb, and the astonishing news arrived that this time, she expected twins.

Sister Wives fans saw that Mykelti was simply enormous with her new twins. So, giving birth to them must have been a relief. Mind you, with three little kids, she probably feels a bit exhausted. However, she seems to be lucky because she hasn’t suffered from post-partum depression after the arrival of the twins. That can be totally devastating and several reality TV stars struggled with it. In the TikTok video, Mykleti claimed that she avoided it because she ate her own placenta.

Some fans thought that Mykleti had over-inflated what eating a placenta can do for new moms. When she claimed that eating it helped to avoid post-partum depression, some folks mocked her. One of them said, “This sounds like a kody theory.” Tony’s wife also mentioned that people get post-partum depression because they are not being given “enough attention.” In response, one person scoffed, saying, “It’s not about the attention being taken away from you… ugh. What a terrible thing to tell women. It’s very complex and hormonal too.”

The Sister Wives star said, “if you don’t put your placenta back into your body…you’re gonna get some postpartum depression. All of the nutrients that someone’s body is growing and creating throughout their whole pregnancy is in their placenta. When you give birth you lose all of that happy juice.” She added, “I’m a huge advocate of drying out your placenta and putting it in a capsule format.” Well, for the squeamish, the fact that she took it in capsules seems a bit of a relief.  Thankfully, she didn’t mention that the placenta takes away the waste from the growing baby.

Is Eating The Placenta A Good Thing?

The Sister Wives star isn’t the first person to eat their placenta and apparently it’s not unusual within certain cultures. As you know, dogs will often eat theirs after birthing puppies. But then, dogs also seem okay with eating dirty old bones. According to WebMD, there’s little evidence to prove that eating your placenta in any form will actually help with anything. However, there are theories that “People who support eating the placenta say that it can raise your energy and breast milk quantity. They also say it can level off your hormones, lowering your chances of postpartum depression and insomnia.”

What are your thoughts? Let us know in the comments below.

Be sure to catch up on everything happening with Mykelti Padron right now. Come back here often for more Sister Wives spoilers, news, and updates.